It’s been said that you can’t tell a book by its cover. That’s hogwash. (I would have used an earthier expression starting with a B, but this is a family blog.) In the real world of real buyers, most people form their first opinion about a book by its cover. While I enjoy the creative process of writing a book and telling a compelling story, I also try to make a good living doing it. Sales in the marketplace are a good measure of how much people like my work. So I want to sell books—lots of books, thousands of books.

My book covers and titles send important messages to potential buyers who are considering my books. You, the reader, may invest five or ten hours to read a book. Your time has a value, and you’re gambling more than the purchase price when you buy my books.

One of the challenging aspects of marketing any book is to choose a title that people will click on. I want my titles to say, “Yes! That looks interesting. I want to learn more about this book.” My books are only available on the internet. On the internet, people don’t read; they scan. I can’t afford to make you, the buyer, work to figure out the meaning of my title. I have to grab you quickly, or you’ll move on to some other writer.

I want my titles to be short, but I want you to instantly understand what my books are about.

For example, I wrote my first novel using the working title of The Accidental Heiress. Bad idea: Too many friends told me that it sounded like a romance novel. One of my sisters-in-law reads a couple of #romance novels a week. Now I would love to tap into a market that deep and rich, but I prefer to write #mysteries and #thrillers. I went back to the drawing board and brainstormed new titles. I even surveyed a few of my fellow writers and readers (including my sister-in-law). 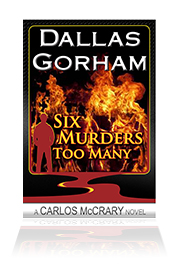 I selected Six Murders Too Many. That tells the reader that this is a #mystery. It also says that it has lots of action. And the cover design with the burning house is a real attention-grabber. If I had gone with my original title, it would probably have been a dud seller. 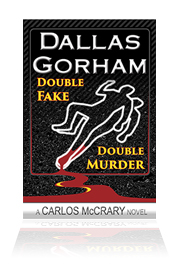 was originally going to be titled just Double Fake. A title search on Amazon revealed that there were two other books with “double fake” in the title. They were both about soccer. So I added “double murder” to the title. Now anybody can tell that this is a mystery, not a soccer guide. And I love the double outline of two bodies on the cover. Mike Butler, my cover designer, came up with that one. Great idea, Mike!

Quarterback Trap, the third Carlos McCrary novel, was so obvious that the title almost selected itself. 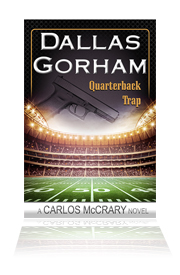 The star quarterback of the upcoming Super Bowl game has his fiancée kidnapped by mobsters who have a huge bet on the game. The star quarterback felt trapped. Duh… The title was a piece of cake. And the cover of a gun over-shadowing a football stadium tells a great story by itself.

Dangerous Friends was a tough choice.

I’m still not crazy about the title, but at least the word “danger” tells the buyer that this is a #thriller. The “dangerous friends” are eco-terrorists that dupe an idealistic college student into committing a #terrorist act. If you think of better title, let me know. The cover image shows a key scene from early in the book that starts the whole thriller on its whirlwind roller-coaster ride to the finish.

In my next blog I’ll cover my latest book, Day of the Tiger.